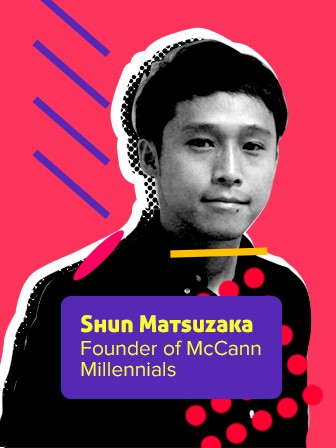 Talking to the inventor of AI-CD β: Shun Matsuzaka

Shun Matsuzaka, a Digital Creative Director from McCann Worldgroup found himself in need of a Creative Lead to discuss and approve his millennial team’s campaigns. So he gathered the McCann Millennials team and they invented their own boss: AI-CD β.

That’s in a nutshell how the world’s first Artificial Intelligence Creative Director, AI-CD β was born. It has already directed its first TVC for a Mondelez brand and has new exciting projects lined-up.

The first challenge for AI-CD β was to provide creative direction for a TVC for Clorets Mint Tab. It was a creative battle against a human director, Mitsuru Kuramoto.

Can you guess which of the following 2 is AI-CD β's proposal?

The 2 spots were then sent in a national poll to see which is the public’s preferred execution to better communicate the message. Kuramoto’s one won, but just narrowly – 54% of the public vote.

However, at an advertising British event, 200 ad executives were again asked to vote and they seemed to prefer the version of AI-CD β.

The creative AI has embarked on new projects since, such as  creating a music video for Japanese Idol music band Magical Punchline. Shun, on the other hand is now on to a robot led Mindfulness Meditation project to enhance creativity.

We chatted briefly with Shun Matsuzaka, the inventor of AI-CD β, to get a glimpse of the way he sees human creativity in relation to the artificial one.

Lifetime subject to learn and improve.

“JUST MAKE IT” to harvest the creative ideas. There are too many great ideas from too many creative brains already. They are just too lazy to make it happen, although everyone can be a maker with one smart phone.

Let me share the story behind AI-CD β. The reason why I created AI-CD β is because when I started McCANN MILLENNAILS, an open innovation taskforce with millennial generation in our Tokyo office, we did not have a creative director. We needed to ask the manager to authorize too many things to proceed projects without a director. So I came up with the idea of making my own boss by using an algorithm. It speeded up everything we do with McCANN MILLENNIALS since we finished creating AI-CD β. And now it’s about how to enhance human creativity.

Shun also mentions he strongly believes in “co-creation”, in a world in which AIs enhance human creativity and not conquer it, they improve each other, not replacing the other.

Learn more about the story behind AI-CD β: