IAA Global Conference. 17 October. Bucharest Vineet Gupta, CEO DDB Mudra Group: ”For me creativity is a way of life” - IAA
Back to news 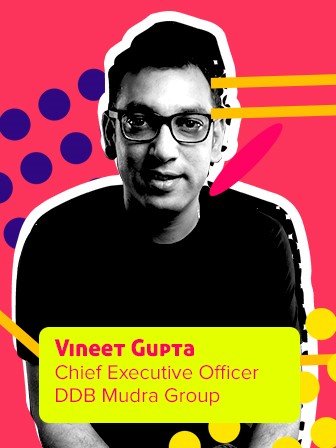 Vineet Gupta, CEO DDB Mudra Group: ”For me creativity is a way of life”

Vineet Gupta, CEO DDB Mudra Group, is teasing us with a few inspiring thoughts on technology, before the IAA Global Conference. Come meet him!

DDB Mudra Group is one of India’s most awarded agencies picking up numerous awards at top national and international award festivals.
DDB Worldwide earned 100 Lions at this year’s Cannes Festival, including 12 Gold, 28 Silver, and 58 Bronze. This placed DDB at #5 among the top agencies in the world at this year’s festival.

We will meet Vineet at IAA Global Conference, but until then, we talked briefly with him about a little…creativity:

What does creativity mean for you?
Creativity for me is a way of life. A way of doing things rather than a measure of what’s been done. The cause rather than the effect.

If creativity is an unlimited resource, how do you harvest your team's creativity?
For starters, we do not look at creativity as a function. Instead, we look at promoting a culture of creativity that is more inclusive and cuts across the organisation horizontally, rather than vertically. We are committed to new ways of doing things. This requires us to commit to collaboration with individuals and organisations across various industries and domains. Collaboration is therefore an essential part of our commitment to creativity as a culture.

Could you share a life story (personal or professional life) on how creativity improved the world? It could very well be a story of how an unconventional, "crazy idea" saved the day, a story on how lateral thinking helped you come up with a better solution.
The fact that I am giving this interview that will be read by thousands of others who I probably don’t even know, is itself a great example of how creativity has made this world so much better and connected.
Like I said before, for me creativity is a way of life.

Vineet has championed the cause of technology in marketing which led him to become a part of the founding team at 22feet, a digital marketing firm founded on the bedrock of creativity and technology. As an entrepreneur, he helped successfully build 22feet which was eventually acquired by the DDB Mudra Group and Omnicom.
Prior to joining 22feet to pursue his passion for digital marketing, Vineet has close to a decade of experience in the Media & Marketing space. In his last assignment as India marketing lead for Microsoft advertising, he led the initiative of driving and maintaining market & brand leadership for the online properties of Microsoft with the Trade Media.

The ad was created by DDB Mudra and highlights that our rivers never show their anger, but what if they did?

The brand obtained the engagement of the audience on social media, using the hashtag #ReviveourRivers and it is a real, beautiful expression of what Creativity4Better stands for.

Sounds good? Let Vineet tell us more at the IAA Global Conference Creativity Can Change The World on the 24-25th October.