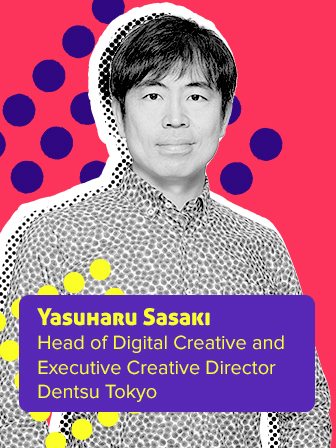 Yasuharu Sasaki: about creativity & innovation in his work

Yasuharu Sasaki, a.k.a. Yasu, is Head of Digital Creative and Executive Creative Director at Dentsu Tokyo. His name is related to digital creative and innovation. Curious by nature, he managed to find a balance for writing, digital design and programming; and because inspiration is not limited to these areas, his work extends well beyond into areas like hybrid arts, digital architecture, game design, and interactive product design. So don’t wonder if we tell you that Yasu spends time inventing things in the field of next-generation communications.

Yasu joined Dentsu as a copywriter over 20 years ago in 1995. It must be the best accomplishment in advertising, if we can say so: staying with the same agency for 21 years. He has made a career switch from a copywriter to a digital creative.

He loves kayaking, camping and flyfishing - these relaxing activities are his secret ways to come up with great digital ideas. So Yasu asks us to let him know if we have any recommendation about a beautiful river in the world.

As an innovator, it’s no surprise that he’s won countless awards at the Cannes Lions, D&AD, The One Show, Spikes, ADFEST and Clio’s, of which he’s also been a jury member.

At Cannes 2017, Yasu and Joe Fry from The ZOO(Google’s Creative Think Tank) appeared on the YouTube Beach stage at Cannes 2017 to explain the value of ‘strange foreigners’ in enhancing creativity. Five years ago, The ZOO and Dentsu began a long-term collaboration. The goal of this project was to try and foster a deeper understanding of each other’s culture and working methods, with the early stages given over to training, workshops and an exchange program that saw Dentsu team members spending three months at The ZOO in New York.

After this period of acclimatisation, the time came to put the collaboration to the test and work side by side on a campaign. For their first project together, ‘Glicode’, the team were able to meet these objectives head on, producing a campaign for a popular Japanese biscuit brand that utilised augmented reality to teach children the basics of coding. The campaign was a huge success, and its impact has been so great that it has contributed to a change in Japan’s education policy, with coding soon to appear on the school curriculum.

Now we need to get to the point and see what an advertising man with so many abilities says about creativity:

One of the important sources of creativity is “curiosity.” If a person has curiosity, he or she will constantly gain a new perspective for great ideas after wandering into the unknown world. So, I let my team to go anywhere they are interested, like designing services, products, or society even if the client brief was to make an advertisement. We always try to setup a mixed team with different specialties for maximizing our curiosity.

One of our teams started “Second Life Toys” project about child organ donation. It is a very small human-powered activity and still in a raising-awareness stage, but it could touch a lot of people’s minds. It is a difficult issue, but a simple creativity of the “mashup animals” made people discuss, and could encourage some people in the world.

Organ donation is an issue that doesn’t get much press in Japan and nor does it get much attention. Dentsu creatives developed “Second Life Toys”, an online project and design campaign in Japan hoping to raise awareness about organ donation. The organisation is giving new limbs to old broken plushies in order to make them complete again.

And the best part is that you can join the campaign by donating your own unwanted toys. You’ll even receive a letter from the “recipient” plushie telling you how your donation has helped to improve their lives.

Take a look at the case study, you’ll be in love with this project:

Feeling more curious? Let Yasu inspire you again by listening him live, at the IAA Global Conference, 24-25 October, at the Romanian Opera House!