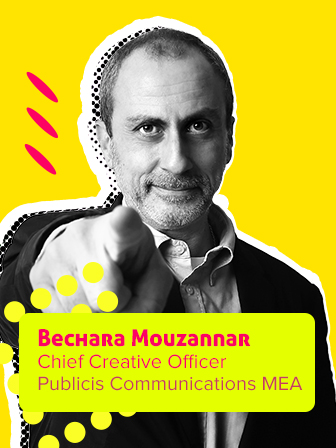 Bechara Mouzannar: "So called creatives don't have a monopoly over creativity"

Bechara Mouzannar on what creativity means, how to harvest it. Meet him at the IAA Global Conference, 24-25 October, Bucharest.

Bechara Mouzannar is the Chief Creative Officer of Publicis Communications MEA and of Leo Burnett MEA, and he is one of the most awarded creatives in the world, according to the Big Won Rankings. Bechara has substantially contributed to winning more than 850 prestigious international and regional awards, in the past 8 years.

One of the recent pieces of work from his group, more precisely from Leo Burnett Beirut - which perfectly illustrates what Creativity4Better does mean - is the '#Undress522' campaign for the NGO Abaad, to raise awareness on the Lebanese “Marry-the-victim” law in Lebanon. The article 522 of the Lebanese Penal code stated that if a rapist married his victim, he would not be legally accountable for his deed. This year, on August 13, the law was officially abolished by the 98% male-dominant Lebanese Parliament after their integrated campaign had engaged with a very large audience, in Lebanon and in the world.

The campaign was awarded this year in Cannes with 3 Silver Lions and 2 Bronze Lions:

We talked briefly with Bechara on what creativity means for him. Enjoy!

Creativity is a mindset, an attitude.

It is the ability to transcend the conventional, the traditional and the obvious, and to create an idea that sets up a fresh perspective or thought that would naturally stand out and relevantly engage the people.

Creativity is unlimited since the potential of the human brain is limitless. Besides, creativity is an only human attribute or ability. Any earthly could be creative if she or he exercises that ability. So-called creatives do not have a monopoly over creativity. Depending on the choice of talents that you put together in a team, you pre-determine the quality or scope of creativity that you are looking for. It is a matter of synergy and combination of individual abilities that think differently.

My job is to inspire the creativity of others, the industry's goal and mission are still to harvest creativity for the sake of selling brands.

Now may be the time to know how to harness creativity in order to survive, in these difficult times for the communications industry.

There are dozens and dozens of stories of campaigns that we did over the last decade, either for strategic brands or for meaningful causes, where a simple engaging idea has literally transformed human behaviour, changing the way people feel, think or live.

A few campaigns have even led to the drafting of new laws that were badly needed, a few other branded campaigns impacted society so positively that these brands became landmarks in the people's lives.

Yet, the example that I'd like to give here comes from my personal experience. Ten years ago, I was attacked in the streets of Rio de Janeiro on my first night ever in Brazil, and something in my mind inspired me to sing a bossa nova song that I knew by heart, in Portuguese, and that eventually saved my life.

If you want to hear more from Bechara, we invite you to come listen to him at the IAA Global Conference, October 24-25, 2017 in Bucharest.