Creativity4Better. The Value of Bravery. Marco Cremona and his take on creativity
Back to news 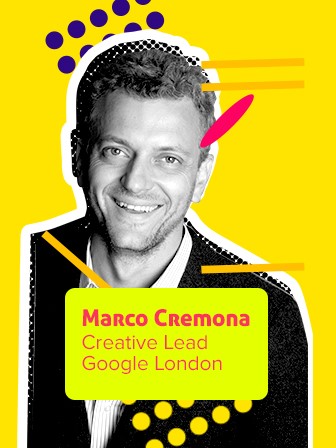 Marco Cremona and his take on creativity

Marco has a majestic career in advertising and communications, started off 25 years ago. He worked for different agencies in different markets until he moved to the tech side of creativity: Google.
He was the first Creative Lead to win 2 Cannes Lions for Russia’s Google office, and has recently moved to Google Creative Labs London.

We had a brief encounter with Marco, to understand his take on creativity, from the standpoint of such a fruitful career.

What does creativity mean for you?
God was the only original creator so for me being creative means to absorb reality, to metabolize it and to express it in the most unexpected way possible..

Could you share a life story (personal or professional life) on how creativity improved the world? It could very well be a story of how anunconventional, "crazy idea" saved the day, a story on how lateral thinking helped you come up with a better solution.

Pride is an overused word these days. One of the few times I really felt proud was in 2005. We were working on a pitch for Telecom, the main Italian telco company. The pressure was palpable and we came up with an idea that not only won the tender but also the hearts of Italians. It was one of the first times in which a brand was used as a sort of a Trojan horse to deliver a message of peace. The story was around Gandhi, delivering a message of peace from his ashram and magically reaching the whole world, thanks to modern technology. 'If he could have communicated like this, what would the world be like today?' was the headline. It was a tough time for everyone back then, with decapitation videos being shown on the news and people hanging peace flags out of their windows. So this message of peace moved the whole country and winning a lion was even less rewarding that that.

If creativity is an unlimited resource, how do you harvest your team's creativity?
I think motivation is the key for everything in life. This means that sharing outstanding creative work is not enough. It's paramount to instill hunger for perfection -which in the creative world translates to awards. Without this drive, even encyclopaedic creative knowledge won't be enough to originate cutting edge work.

Alive Memory is one of the Google Russia projects creatively led by Marco that received international accolades and a lot of free media in Russia. The project aimed to collect and catalogue World War II letters so that Russians never forget what they and their families had to put up here. It was launched on the 80th Anniversary of Victory Day.