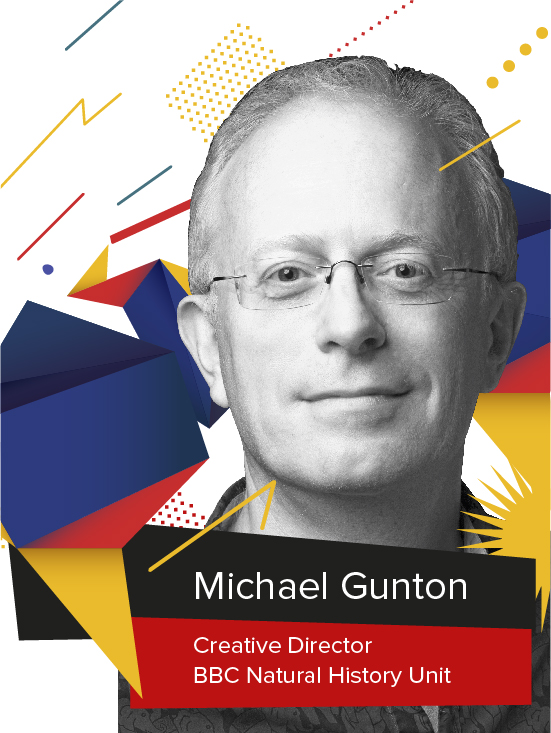 The Creative Director of Factual and The Natural History Unit

Mike Gunton works for BBC studios as The Creative Director of Factual and The Natural History Unit. Within this dual role Mike works as an executive producer on many BBC programmes, acts as an ambassador for the BBC internationally and is responsible for bringing new and pioneering stories and techniques to audiences globally.

Mike began working for the BBC after he graduated with a first class degree in Zoology and a Doctorate at Bristol and Cambridge Universities. He worked initially at the Open University Production Centre and within children’s and learning output. His experience was largely in documentary filmmaking when he moved into the BBC’s Natural History Unit (NHU) to work on David Attenborough’s Trials of Life.

He quickly established himself within the NHU; after ‘Trials’ he developed the ‘People and Animals’ output, ran the Natural World strand and has overseen more than 200 wildlife films including critically acclaimed series and programmes: Galapagos, Yellowstone, Madagascar, Life, Africa, Shark, Big Cats, Attenborough and The Giant Dinosaur and Life Story. He has also been involved in a number of special projects with David Attenborough including “Attenborough at 90”.

Mike’s projects all come with his own stamp of innovative storytelling, using unique perspectives and cutting edge technology to bring audiences programmes that evoke wonder, fascination and empathy for the natural world. His most recent major series, the record breaking Planet Earth II, was seen by over half the UK population and has gone on to win countless awards; most notably 4 BAFTA’s including the Hugh Weldon Award, and 2 Emmy awards including Outstanding Documentary Series.

Mike has also directed the Emmy award winning film One Life. He speaks internationally at media, entertainment and scientific gatherings as an ambassador for wildlife filmmaking, the BBC and the natural world. He is particularly pleased to be in the recent “TV Power 100” at number 71 – one place above Mary Berry!

In November 2017 Mike was awarded a Royal Television Society Fellowship, as part of the Society’s 90th anniversary, and in recognition of his contribution to the television industry.