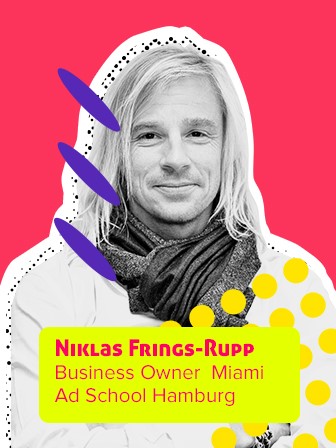 Niklas Frings-Rupp started his career as an account manager working for agencies like DDB London, TBWA Germany, Springer & Jacoby and Jung von Matt. Over the years he worked for a large number of clients like BMW, Mini, Apple, Bosch, Media Markt, GlaxoWelcome, Weihenstephan, Der Spiegel, Unicef and many more.

In 2003 he founded Miami Ad School Europe together with Oliver Voss, one of Germany’s leading creatives. The school started in an old hospital in Hamburg with only 12 students. Ever since the school grew rapidly and now has over 100 students with about 30 nationalities. Niklas and Oliver expanded the school with opening part time locations in Stockholm, London, Amsterdam and Paris and some more countries. In summer 2009 he opened the MAS Berlin.

In 2010 D&AD named him “Best teacher of the year”. The school is the only advertising school outside of the US to be always mentioned in the Gunn report among the best advertising schools worldwide. Work done by students interning have resulted in 24 lions at Cannes, 12 pencils at the One Show, Andy’s, Clios, nominations and 7 yellow pencils at D&AD and a couple more at the German ADC where he became member in 2006.
In his spare time Niklas likes to race his dusty somewhat old Porsche on the German Autobahn and professional race tracks or surfing some waves on the north coast of Germany and on the Atlantic Ocean.