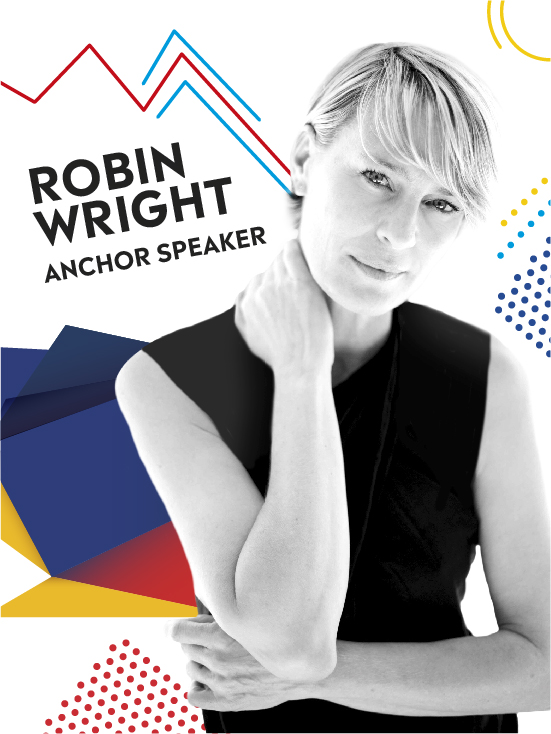 Robin Wright is an award-winning actress and philanthropist who is carving an incredible, long-lasting mark in Hollywood. She can currently be seen in the highly acclaimed Netflix original series House of Cards, alongside Kevin Spacey, which is produced by David Fincher. Robin has received outstanding reviews for her portrayal as the formidable ‘Claire Underwood.’ She was nominated for a Golden Globe for the role in 2014, 2015 and 2016, taking home the award in 2014. Robin was nominated in two categories for the 2015 Screen Actors Guild Awards for Outstanding Performance by a Female Actor in a Drama Series and Outstanding Performance by an Ensemble in a Drama Series category. She also received Emmy nominations in 2013, 2014 and 2015 for Outstanding Lead Actress in a Drama Series. The first three seasons of House of Cards are available exclusively on Netflix.

No stranger to the big screen, Robin was most recently seen in Everest, which opened in theaters September 2015. Robin will star opposite Jake Gyllenhaal, Keira Knightley and Josh Brolin in this thrilling adventure epic.
Robin consistently receives glowing reviews for the various characters she plays. In 2010, Wright received critical acclaim as ‘Mary Surratt’ in Robert Redford’s riveting courtroom drama, The Conspirator. Also in 2011, Wright starred alongside Woody Harrelson in Oren Moverman’s Rampart. Wright received praise for her portrayal in 2009 as ‘Pippa Lee’ in Rebecca Miller’s The Private Lives of Pippa Lee. The same year, Wright was also seen in the Christmas classic, A Christmas Carol, directed by Robert Zemeckis.

Wright has been recognized for her outstanding performances over the years. She was honored with a career tribute at the 35th Annual Deauville American Film Festival. Her first two nominations, a Golden Globe and Screen Actors Guild for Best Supporting Actress, came as early as 1995 for her unforgettable role as ‘Jenny’ in Robert Zemeckis’ Best Picture Oscar winner, Forrest Gump. Wright earned her second Screen Actors Guild nomination for Best Lead Actress in She’s So Lovely, and her third nomination for Best Actress in a Television Movie or Miniseries in Empire Falls. She has received three Independent Spirit nominations for her performances in Loved, Nine Lives and Sorry, Haters. Additionally, Wright starred in and served as an executive producer on Virgin, which received an Independent Spirit nomination for Best First Feature also known as the John Cassavetes Award.

In 2014, Robin launched Pour Les Femmes, a socially conscious sleepwear line with clothing designer Karen Fowler. Pour Les Femmes partnered with Action Kivu and Synergie, two organizations dedicated to assisting in the assurance of safety for women in the Congo who are victims of violence.

Robin was most recently seen in the films A Most Wanted Man with the late Phillip Seymour Hoffman, and in The Congress. Other film credits include: The Girl with the Dragon Tattoo, Moneyball, the cult classic The Princess Bride, What Just Happened, Houndog, which Wright also executive produced, State of Play, Breaking and Entering, Beowulf, The Singing Detective, White Oleander, Hurlyburly, The Pledge, Message in a Bottle, Unbreakable, Moll Flanders, Toys and Room 10 for Glamour magazine’s “Reel Women Film Series.”