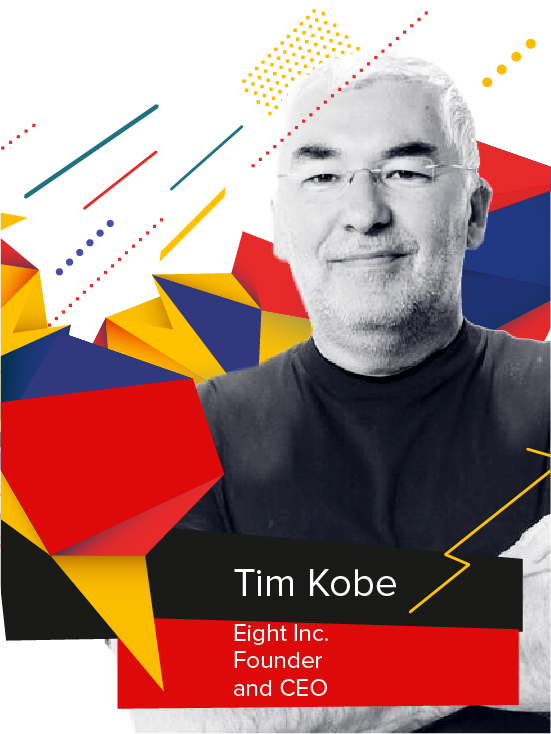 Tim Kobe founded the globally recognized strategic design firm Eight Inc. in 1989. Today, Eight Inc. has offices in San Francisco, New York, Honolulu, Tokyo, London, Singapore, Dubai and across China and is a leader in innovation and branded experience working with companies such as Apple, Virgin Atlantic Airways, Nike, Coke, Knoll and Citibank. Eight Inc. also received the top award for the Architectural competition “High Density on the High Ground” and were selected to represent the United States at the Architecture Bienniale in Venice Italy. A graduate of Environmental Design with honors in 1982 from Art Center College of Design. Kobe worked in Los Angeles for Herb Rosenthal and Associates, at the American Broadcasting Company during school and in New York with Murray Gelberg and The Burdick Group in San Francisco.

In 1987, Kobe became a founding partner in West Office Design Associates, a firm focusing on museum and exhibition design that was responsible for the master planning of museums and for several science museum exhibitions in the US and the Hong Kong Science Museum. Eight Inc. works across many traditional disciplines: strategy, architecture, exhibition, interior design, product, communications and branding. Many projects have received international design awards and have been published in Asia, Europe, and the United States. Kobe has lectured at the Art Center College of Design, California College of Arts and Crafts, and the San Francisco Academy of Art and on behalf of the US State Department regarding sustainability and architecture in Bangkok and Los Angeles.

Tim has been a keynote speaker at conferences, universities and business and design events throughout the world including the prestigious annual Picnic in Amsterdam, the annual Microsoft Symposium in New York, Fast Company Innovation by Design and the Northern Lights Congress in Helsinki Finland. Kobe is also a trustee at Art Center College of Design and currently the Chairman of the Academic Affairs Committee. He also serves on the Board of Directors for the Grabhorn Institute in San Francisco California and divides his time between California and Singapore.